Don’t let the long line deter you. These guys are frying up tortillas, chopping chunks of meat and boxing up birria goodness at lightning speed to keep it moving along. And besides, you’re waiting on some of the best birria tacos in New York City. ¡Cálmate!

No reservation is needed at Birria-Landia Tacos, just a little bit of patience and a big appetite. Located in Williamsburg at Metropolitan and Meeker Avenues (or at it’s original location in Jackson Heights, Queens) it’s a no frills food truck serving up only four items. Why complicate things when it could all be so simple. Their prices are low and with less than $15, you can try all of their offerings.

Every item on the menu features juicy, flavorful, chopped birria. It’s a spicy Mexican meat stew typically made with goat, lamb, mutton and sometimes even beef. The most popular items on their menu are for sure the Tijuana style tacos and the consome broth.

Tacos: The tortillas are drenched in beef fat and fried to perfection for a surprisingly crunchy top layer and a moist flavorful bottom filled with chopped birria, onions, cilantro and sauce.

Consome: The consome is a flavorful broth made with *say it with me now* chopped birria, onions, cilantro and lime for a tangy yet fresh and hardy bite.

Let’s just say, birria is to tacos as French fries are to burgers — a match made in heaven. People typically order the two as a pair, to dip the already juicy and dripping tacos in the consome broth or to pour the broth over the tacos with every new bite… because there’s no such thing as a too-juicy taco.

A crunch into this combo is explosive for the taste buds. The consome is rich with huge chunks of meat, but still light and fresh because the broth isn’t heavy. The lime and cilantro provide the perfect pop and a little spice at the end gives a good kick; even for that friend who “doesn’t do spice.” The taco offers a surprising crunch at first that leads you down a path of flavorful shredded meat, crisp onions, cilantro and a sauce that drips down your hand, so you know it’s real. Don’t worry, the mess means you’re doing it right.

Because it’s a food truck, there’s no seating area, but *pro tip* there’s a park directly across the street where you can snag a bench and get to grubbing. If the possibility of park pigeons eyeing you down for a bite makes you uneasy, walk a few minutes up the street to Bagel Smith, where they have a bench, stools and a wooden bar table for casual outdoor dining. No purchase necessary, but maybe grab a drink from inside for good measure.

Owned by brothers José and Jesús Moreno, Birria-Landia Taco truck gets props for putting Birria tacos on the map in NYC — although they weren’t the first to serve them, just the best to do it. They’ve received numerous accolades for their simple but delicious Mexican lineup, proving that sometimes less is truly more.

Have you tried birria tacos before? Would you trek to Brooklyn to try these? Let me know below! If you enjoyed this post, click the video below to bring this taco truck experience to life. You might also like this post on one of the best taco bars in Syracuse, NY. 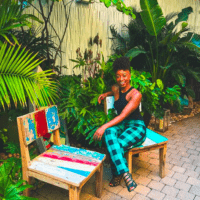 Girlfriends guide: the BEST THINGS TO DO IN ATLANTA DURING COVID

BEST RAMEN IN NYC FOUND SOMEWHERE YOU MAY NOT EXPECT (VIDEO)

Girlfriends guide: the BEST THINGS TO DO IN ATLANTA DURING COVID

where to celebrate cinco de mayo in syracuse, New York